Mary A. Osborne’s books were inspired by travels to Tuscany and the walled village of Certaldo—home of medieval author Giovanni Boccaccio—where Mary envisioned Santina, Trotula, and Emilia slipping through narrow, cobbled streets and ancient piazzas.  Near the same time, when delving into the topic of alchemy, including C. G. Jung’s Psychology and Alchemy, she scribbled down thoughts and ideas in a leather-bound notebook. The notebook provided the inspiration for A Manual to the Science of Alchemy, from which excerpts appear in both Alchemy’s Daughter and Nonna’s Book of Mysteries.  A blend of history, alchemy, adventure, and romance, her books are for those, both young and old, who love historical fiction, fairy tales, and a touch of esoterica.

Alchemy’s Daughter is the story of Santina Pietra, who lives in medieval San Gimignano. Santina is somewhat obsessed with  Calandrino, a brilliant young scholar who is, unfortunately for Santina,  preoccupied with his ancient alchemical texts.  Soon Santina meets Trotula, the village midwife, who challenges her to forget Calandrino and become the woman she is meant to be.  Some say she is a victim of the midwife’s spell, but Santina is determined to follow in Trotula’s footsteps even as calamities strike.

Nonna’s Book of Mysteries tells the tale of Emilia Serafini, who wants to learn to paint and become an artist.  But painters’ apprenticeships for young women do not exist in the Florence of Renaissance Italy. The odds appear stacked against her until she receives a fascinating book, A Manual to the Science of Alchemy, which once belonged to her grandmother. Infused with ancient mysticism, Nonna’s Book of Mysteries is the portrait of a young woman who defies convention and seeks her destiny. 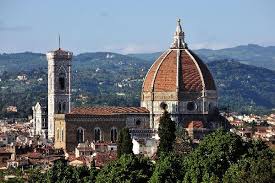